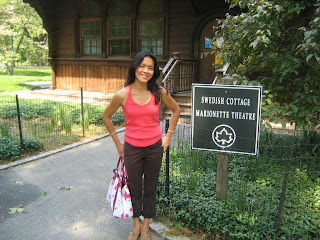 When I get to write a fictional love story, the setting will definitely be in Central Park, New York - and the background music will probably  be "Someday My Prince Will Come". (Probably because I just came from yet another concert at the high school where my 15yo performed that song -- my son in the piano, while his friend played the saxophone. Kind of cute because in the jazz band, my son plays the saxophone and his friend plays the keyboard.)

Upon hearing that song and upon learning that the this week's theme at Creative Nachos is "Put a little love in your heart", an inspiration for a fictional love story came to mind...

Somewhere in , a young expectant mother rushes to the emergency room. She is having labor pains.

An attending doctor is on his way out the hospital when the young expectant mother touches his hand. He then adoringly looks at the mother and asks permission if he can listen to her baby. The young mother is confused but for some force within her, agrees to let the doctor do so.

As the attending doctor gently presses his stethoscope to the young mother’s belly, he whispers, “to love again”.

The young mother feels a kick in her belly.
The attending doctor smiles so handsomely and says, “she’s beautiful.”.

The OBGYN on duty attends to the young mother.

The attending doctor is whistling as he leaves the hospital and drives back to his home. As he was making a left turn, a big bus hits the doctor’s convertible car. Ambulance is in the scene and takes the attending doctor to the emergency room.

At that very second, back in the hospital, a child is being born.
It is a full moon, and a lovely girl is born. The young mother names her Maria.

While back in , the young attending doctor dies.

At around the same time, a loud cry from a baby boy echoes in the hospital in . The young mother names the new born baby boy, Steven.

In Central Park by the Swedish Cottage Marionette Theatre, a 17 year old boy and girl bump into each other. A soothing sensation touches their skin. As the girl turns to look, her eyes meet the boy’s eyes and somewhere in her mind she hears, “to love again”.

That night was a full moon. The 17 year old girl sleeps and dreams of a young doctor who whispers to her ears, “to love again.”
(It was the same dream she keeps having since she can remember)

-- to be continued –
"To Love Again" (C) Copyright 2011 Jenjen@GottaLoveMom All Rights Reserved.

Now here’s my son’s latest composition, “Sweet Simplicity” that will put a little love in your heart.