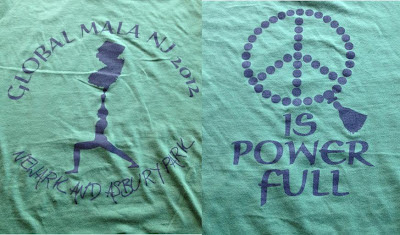 “Peace begins with a smile. Every time you smile at someone, it is an action of love, a gift to that person, a beautiful thing.”  ~ Mother Theresa

I believe that every time you share a part of yourself to someone, be it as small of a gesture like a smile, you are extending your love. LOVE is what living is all about, and Sunday’s Global Mala NJ in was all about love.

I am an occasional yogi. I don’t even think I can call myself a yogi. The most yoga I had done was at home during my P90X work-outs. Although I truly enjoyed and invigorated every time I did yoga at Alluem , I can count with my fingers the number of times I practiced at my yoga studio.

My friend and certified life coach, Sonia, is someone who encourages me to not fear the unknown, to push the envelope. She had told me about Global Mala NJ in 2011, but I didn’t really “cave” in until a few months ago when I signed up to attend Global Mala NJ 2012 in . Aside from supporting my friend, I registered because I wanted to hear inspirations from Cory Booker, the Mayor of Newark. I invited a few close friends to sign-up, not knowing what to expect.

My week had been a hectic but a “wow” week.  I only had 3 hours of sleep when I dragged myself to ride with my friend, Dawn, to that Sunday (Sept. 23rd). We were up by 5:30 a.m. since we needed to be at the venue by seven in the morning to help with pre-registration.

I was up on my feet the whole day  Saturday from a community outreach in Jersey City that I thought I'd be falling asleep by 10 a.m. I was skeptical going in. I was rolling my eyes every time I thought of the 108 oms, sun salutations and yoga poses.

“There is no way I’m doing 108 oms, or even getting past the first few cycles of sun salutations. How many downward dogs can I possibly muster? ” I kept telling myself.

But I kept an open mind. It was a beautiful day after all.

The Mayor couldn’t be there in person. I was disappointed. However, the yoga instructors who were present were all beaming with smiles. So I kept an open mind and said, “They all look so cool, and so at peace.” You see, I believe that when people smile, they are presenting you with a gift – and I was not about to push it aside.

There were various speakers that gave inspirations. And before I knew it, I forgot who was absent and I was filled with who were present. 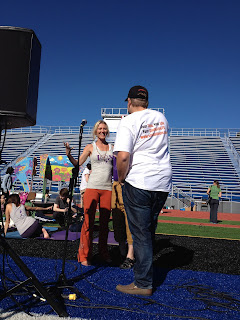 The founder-catalyst, Shiva Rea, gave an inspirational introduction that gave me goose bumps. What resonated the most was when she said, “a good seed can grow on its own.” 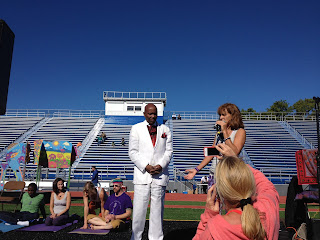 Hearing from the Street Doctor strengthened my belief that “you should never ever give up.” 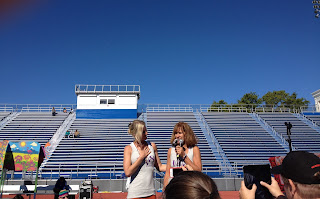 Dave Romanelli’s statement, “Be a warrior, not a worrier”, reitirated my philosophy of looking at the glass of water – not half-full or half-empty, but be lucky that there’s a glass holding the water. 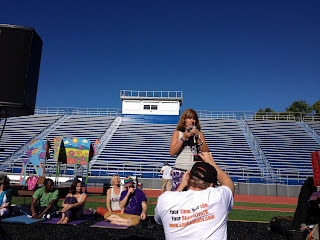 The question, “How are you doing?”, had a new meaning since Debby Vinokur-Kaminsky, one of the peace-igniters of Global Mala, shared one of her encounters with a parking attendant who answered , “Excellent but improving.” 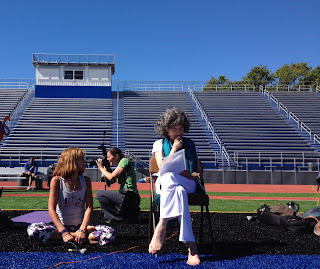 True, we can’t all be kumbaya at every moment. We need time to vent. It’s human nature, and trying to find the good in anything, and I mean anything, is one thing that lifts us when we’re feeling like we’re at the end of the rope.

At that time, I was still skeptical if Global Mala NJ could offer something I didn’t already know or something I would have experienced elsewhere regardless.

The uncertainties and chaos of the world were in my mind. Although it was repeated that day that “chaos is energy” and “peace is powerfull”, my mind knew that not every one truly knows how to smile, and not every one remembers that we belong to each other. 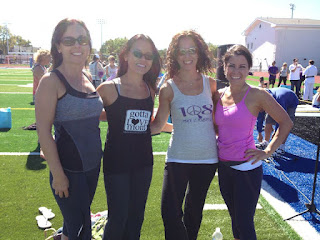 Then the 108 oms started. With the first 20 something oms, my mind was wandering. I was thinking of all the tasks I needed to attend to but then – I don’t know how, why and when, but I managed to listen to my own being and felt the energy of the hundreds of people who had their eyes closed but their hearts opened. By the 108th om, I felt something I couldn’t explain: a new sense of awareness, an indescribable feeling – but a feeling of calmness.

When I relayed this revelation to my son, who plays the piano at least 5 hours a day, he said something powerful, “Mom, can you imagine what it would be like if you felt the same awareness on the  first om, as you did on the 108th? It’s like playing the piano, hearing the first note like it was the last note – same energy, same purpose, same intensity.”

The sun salutations followed. I was still feeling the new found awareness that the 108th oms revealed. At first, I was focused on memorizing the routine: inhale, exhale, plank, cobra, downward dog, step forward, hands-up to the sky and so on. I don’t remember at what point did I start to feel the connection because all of a sudden, I started focusing and LISTENING with my ears, eyes, and heart.

So when Elena Brower, founder and co-owner of ViraYoga,  told the crowd to offer our sun salutations to the people who make us behave better – tears started forming at the corner of my eyes and travelled down my cheeks which were warm, not by the radiant rays of the sun, but by the sensation I felt from being alive. I tried to control my emotions at first but it was so strong of an emotion that I had to let go – and that’s when I felt “something good, something real”. I offered the rest of my sun salutations to my family – with hopes that I would be able to embrace them without having to travel to another continent or to another world.

Without effort, I marshaled my energy as we all raised our hands in harmony, and with every breath and movement we felt what life meant to all of us: peace.

The last yoga pose was something shared with my close friend, Dawn. We were sitting back to back, -- relied on each other for support and encouragement. 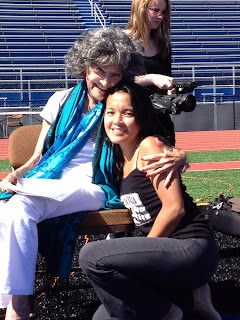 Before I left, as I posed for a picture, I got a motherly hug from Tao Porchon-Lynch, the World’s Oldest Yoga teacher. Her smile and kindness remind me of my Lola Inay (grandma). Tao is a reminder that we can accomplish anything as long as there is love and peace within us.

I was surprised with my reaction from my first (but not last) Global Mala NJ. My body was exhausted but my spirit's on fire!

With renewed inspiration and inner peace, I say "good bye" to you for now, with my son's original composition, "Sweet Simplicity". May your day be filled with nothing but love.