Is it me? Did I lose my sense of humor? Am I being uptight about nothing?

September 26, 2010
A few weeks ago, our family went to the mall to celebrate at Cheesecake Factory. I was surprised at the billboard advertising inside the mall. (I used to go to the mall at least once a week. But since I am now on a limited budget, I don’t even remember the last time I went shopping.)

When in the mall with my 9yo, I try to avoid passing by Victoria’s Secret. But to my surprise, there seems to be very limited square footage that’s safe or “kid-friendly’.

Am I getting too old?
I'm only 46 years old but have I lost my sense of humor?
Am I being uptight about nothing? 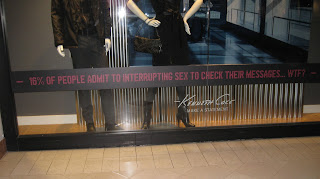 (The window says: 16% of people admit to interrupting sex to check their messages....WTF?" 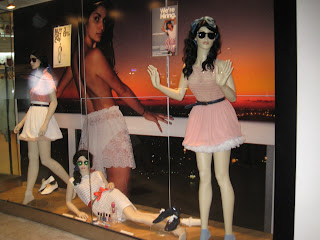 I used to work in the city (NYC) and was barely “Americanized” when I managed a group of computer programmers. I was offended on how quite a few high ranking executives cursed out loud at almost every meeting.  After a decade of that environment, a memo probably went out because the use of curse words “mellowed” down.

I sometimes still couldn’t stand watching my favorite shows when the “f” word was uttered in every sentence. (Believe me, whenever I watch these shows, I ended up saying “freaking” this and “freaking” that. So you see, if you hear it often enough, your own self will start saying something equivalent to those words). 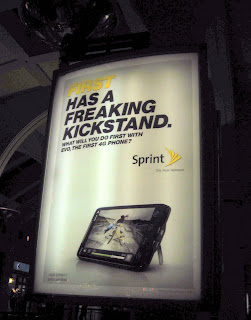 I tried to “nag” my kids that saying bad words are just not being polite. (I don’t think my nagging had been effective because my older kids seem to have no problem saying it. Not in front of me, but in their writing – texts or FB updates. )

I think I am fighting a lost cause? Is it fashionable to curse?

Are there feelings that can't be expressed unless attached to a curse word?

It does make someone feel different when things are totally “f’d up to scream the word on top of their lungs! But does it make it right to say it so often?

Is it acceptable to let the kids say “freaking” ? Isn’t that the same as the real curse word?

Am I making a big deal out of nothing?

Or have I totally lost my sense of humor?

Or is it hormones speaking?