We were robbed of $1400. The criminals used eBay to facilitate the crime and eBay isn't standing by their system or their customers.

On Sept. 30, 2014 I received a notification from Paypal that I received a confirmed payment of $665 from Dawn Morris and that I should ship the merchandise.
On the same day, Dawn communicated to me through the official eBay email system where to ship the lens that she had purchased for her daughter. 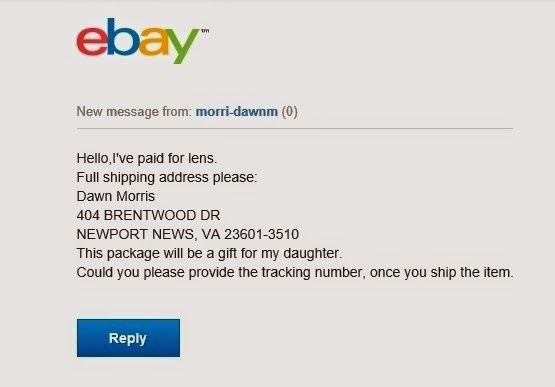 On October 2, 2014, my son and I delicately gift wrapped the lens and added 8 complimentary lens bracelets. My son also included his business card with a note saying, "Thank you. If you have questions about the lens and photography, please feel free to contact me."  We were happy that another photography enthusiast was going to make use the camera lens. I mailed the lens to Dawn through USPS Priority Mail, and also provided the Insurance and Tracking Number of VH 950 586 367 . 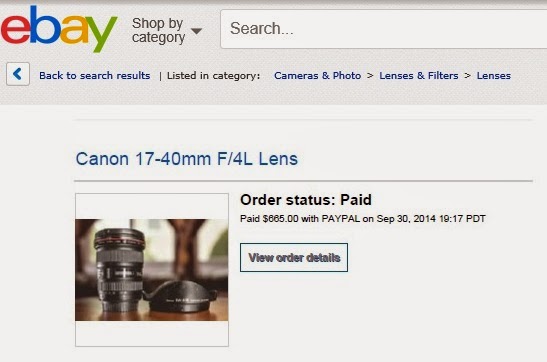 A few days later, the buyer, gave my eBay account an A++ and positive feedback and thanked me for the lens.

However, on November 1, 2014, Paypal sent me an email informing me that the buyer opened a chargeback with the credit card issuer and that the buyer did not authorize the purchase.

To say that I was distraught was an understatement.

I explained the situation to the customer representative named Rene. I informed her of the following:


The representative asked me to email her any supporting documents, which I did. She also informed me that she was able to review the communication I received from the buyer through the eBay system. I asked the representative if I needed to contact the buyer, and she replied that there was no need.

After listening to my case the representative told me that she would reverse the chargeback since I am a valued customer and that I am protected. However, she added that next time, or in the future, whenever I sell again on eBay, any changes to be made to the shipping address should be changed directly on Paypal.

For that specific transaction, eBay collected $66.50 and Paypal charged me $19.59 for the transaction fee.

My panic subsided. And I was relieved that the chargeback was reversed. But I was dismayed that such a thing could occur within eBay’s system.

But this is where the story gets much worse.  On November 17, I received an email from Paypal stating the following:


"One of your buyers opened a chargeback with their credit card issuer. This means that the buyer has asked their card issuer to reverse the money for this transaction.


We want to help you fight this chargeback, and are disputing it with your buyer’s credit card
issuer.


In the meantime, the disputed amount has been debited from your PayPal account because
of the following reason(s):


•The merchandise was not shipped to the address provided on the Transaction Details page.


In addition, you have been debited a chargeback fee of $20.”

That was Thanksgiving week. That email brought me to tears and depression! I felt completely violated. What a depressing way to start the Holiday Season!

Grief-stricken, I called Paypal and informed them of the conversation I had with the customer service representative on November 1st.


"I can't believe there are bad and fraudulent people operating within eBay and that they don’t protect their honest users from criminal behavior." I exclaimed.


"There's a lot of bad people everywhere - not just on eBay!" the eBay representative replied.


I asked if there were notes on my account. After not getting any resolution from the customer representative, I asked to speak to their supervisor.

This time, I spoke with Melissa, the supervisor. She informed me that I should not have been told that I was protected. Melissa emphasized that I wasn't covered under Seller Protection.  I emphasized that ALL transactions were made through the eBay system.

However, Melissa said that Paypal will help me fight the chargeback but may not get a decision for 75 days. In the meantime, I owe Paypal $665 and the $20 transaction fee!

I am a trusting person. I believe that there's kindness in people. When I see a stranger, I smile and say "Hello".  When people need help, I figure out a way to inspire other people to help other people. I usually root for the underdog. Maybe being nice, trusting and compassionate is a flaw.

So being a victim of a fraudulent transaction which eBay and Paypal facilitated has been causing me to lose sleep - aside from the fact that I was just robbed of $1400 through eBay!

I also called eBay and reported the buyer. I sent an eBay message to the buyer, but I didn't get any response.


I also reported the Buyer through eBay which ironically states that "eBay is committed to making eBay a fair and safe marketplace -- which helps protect you as well as the rest of the community." So far, this eBay experience is unfair and unsafe!

The representative told me that I should have printed the shipping labels through eBay. I replied by saying, "I hand-wrote the address and provided the tracking number."  If it was so essential that shipping labels would have prevented the fraudulent transaction, how come eBay and Paypal didn't have big, bold, warning signs to alert the Seller?

DO NOT SHIP MERCHANDISE ON ADDRESS NOT RECORDED ON THE BUYER's PAYPAL ACCOUNT!


The representative said that shipments to unconfirmed addresses are not covered.


We recommend against stating in your listing that you'll only ship to confirmed addresses. Since a confirmed address isn't a requirement for Paypal Seller Protection, this is an unnecessary restriction and might discourage a potential buyer. 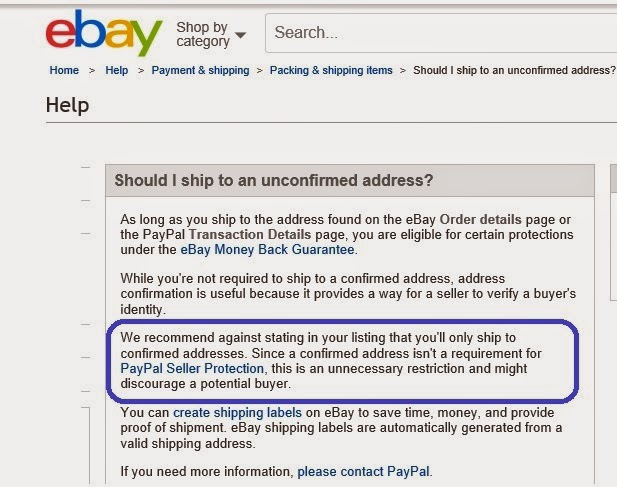 For all I know, Dawn Morris has already sold the camera she "stole" from me on eBay -- which would mean that eBay is allowing stolen merchandise to be sold on their site!

I can't believe I was robbed and that the criminal used eBay to facilitate their crime and that eBay isn't standing by their system and customers.

The following is a screenshot from the Ebay Community webpage.  There is a long thread in there with posts from many people who have been scammed.  Please share this link so that people can learn about these scams and how Ebay doesn't do anything to help the victims.

Please help get the word out.

UPDATE: On January 31, 2015, PayPal's office of Executive Escalations contacted me . Read more on "The Power of Pen and Persistence: Paypal's reply to my appeal regarding an eBay scam.