The Joy of Giving : ABC Project - Apples, Books and Crayons 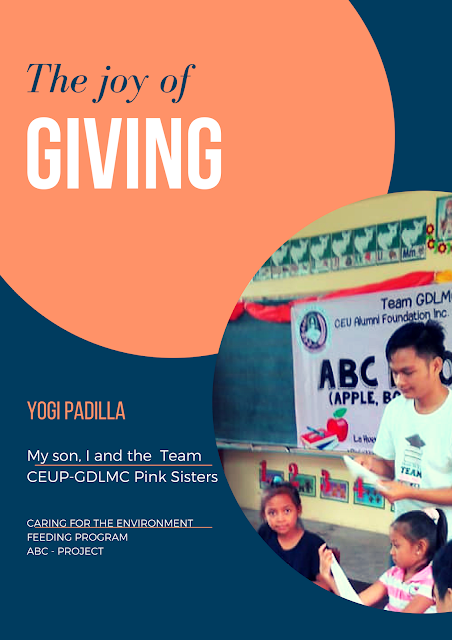 I’m a Psychologist by profession, born and raised here in the Philippines.

I worked in the Human Resources world for the past two decades before I ventured into my online teaching and tutoring career – teaching English to foreigners in relations to their business communication needs.

I’m a staunch advocate for caring for the environment and  wellness programs leading to volunteerism. It’s the life we embraced as a family since the early 90’s.

I got married late but I’m thankful that we’re blessed with one dutiful son named “Vyasadeva das.”
His name, “Vyasadeva” was derived from a Sanskrit name which means the literary incarnation of ‘Krishna’ and the word “das” meant servant.

I went to Centro Escolar University in Paranque (aka Generosa de Leon Memorial School), an all-girls institution, where I completed my  secondary education.

I got my taste of what it was to be with all the girls in completing my academic and co-curricular requirements many years back, say some more than 3 decades.

After being preoccupied with my career and family obligations, fate found its way to get in touch again with my fellow alumnae.

The love and dedication of the alumnae in the Philippines and overseas, paved the way to the CEUP-GDLMC Foundation.  It was organized by representatives from different classes and one of the objectives is helping the qualified children of its alumni members.  This is through the provision of the Annual Scholarship Program.

This year is such a blessing because my son was qualified to be one of the scholars. 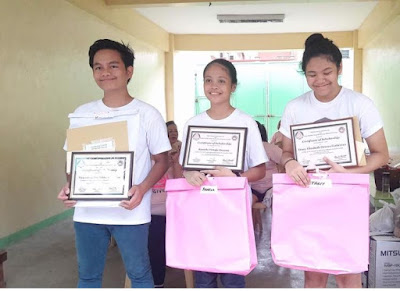 Scholarship grant awardees presented by Team CEUP-GDLMC on May 2017 after the Brigada Eskwela at Don Galo Elementary School in Paranaque.

As part of the requirements of being scholar, aside from maintaining good academic record throughout the school year, the scholar needs to participate in the service project events lined up for the  school year.

My son is an only child and had been home schooled in his primary and secondary education. My husband and I dedicated to assist, support and encourage him to give back on his own way.

This year, we joined the project “Brigada Eskwela” , a project initiated by the Department of Education, to assist public elementary schools in preparing their classrooms by painting the doors and railings  before school year opened in  June. The school assigned was Don Galo Elementary School in Paranaque. The service project became a family event.

We also participated in the Feeding Program held in the Nutrition Week in July, an event tied up with the Department of Health (DOH). The venue was in La Huerta Elementary School, La Huerta, Paranaque. 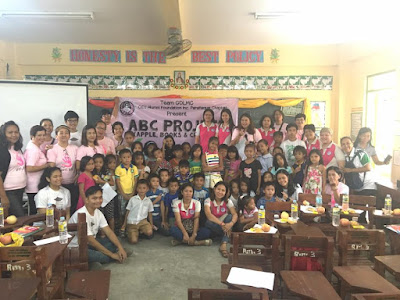 The ABC Project organized by Team GDLMC on September 23, 2017, at the La Huerta Elementary School in Paranaque.

The third and most exciting project we supported and volunteered for was the Launching of the “ABC Project – Apples, Books and Crayons Project” to help selected third grade elementary students with their reading comprehension at La Huerta, Paranaque.

I think with all these experiences and my involvement, I am excited to say that I think I influenced by son to be an educator. He decided to be a future English teacher.

My son led one of the learning modules to help the young minds appreciate and  improve their reading skills by exploring the fable  ‘The Tortoise and the Hare.” He did it successfully after being so nervous because it was his first time to speak in front of the School Administration heads and teachers, organizers, alumnae and the young students before him.

But then after the project, he told me, “It’s fulfilling!  I made it, Mom!”

There is always willingness to share and extend the gifts and talents to its members and to the community where we had been educated – over 3 decades ago.

There are lots of love spreading through the spirit of giving back. We are proud to be a part of this endeavor!

Yolando T. Padilla aka Yogi is an active member of Team CEUP-GDLMC. If you're an alumna of CEU, Paranaque and want to join Team GDLMC and be involved with the service projects, contact Yogi on Facebook.