I couldn’t squeeze in an exercise routine last Sunday since it was Number Four’s 2nd gymmastics meet. Our youngest is the only one who really got in to sports which involve giving up our weekend mornings. (Although when my oldest, Number One, was little, we were always running around to different dance competitions) 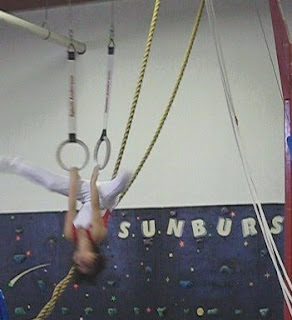 There are some memories, although not captured digitally, will always be in our hearts and minds. When Number Four received his 4 ribbons for Rings, Floor Exercise, High Bar and Pommel Horse and a medal for all-around, Number Four was beaming with pride, joy and pure happiness! He held both his hands up high, smiling ear to ear, while holding on to the accomplishments of the day. (Of course, I was teary eyed!)

Hard work did pay-off. Since last September, the little guy practiced 8 hours in the gym and endless handstands at home! But the most important part is that he is having fun and he is committed (for now)! 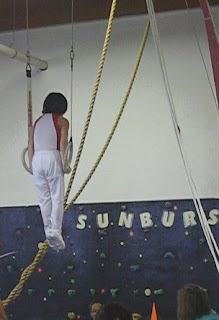 When Number Four was born, he was seven weeks premature. He didn’t really speak until he was almost three. I have an uncle and aunt who are deaf and mute. My mom used to tell me that it skips a generation so you can just imagine what I was thinking. As a baby, he wouldn’t let me hold him or rock him because he  had severe acid reflux. That’s why now that he’s eight, I still insist on getting my “panda bear” hugs from him! Number Four was a very hyperactive child who was difficult to control or reason with; He couldn’t focus in class ( a shout-out to the best Kindergarten teacher who noticed and did something!) and I just thank G-d, that now, he has found his space - and loving it!
He loves to read. He’s been reading the “Big Book of Questions and Answers”. Last night, he stumbled into “How babies are born!” And just like any books he’s read, he loves to share all the information that he recently discovered. He has a cute way of relaying such knowledge. He was gigling when he told me that he knows how babies are born!! (You wouldn’t believe what’s in the Q&A books!!) So now, he thinks, he wants to be a doctor and a gymnast coach!

One thing I learned from him (and my other kids) is that in any project I put my mind into, I have to view it as a commitment: whether it be writing or completing the Power 90 Challenge.

As American athlete, James Owens once said,
“We all have dreams. But in order to make dreams come into reality, it takes an awful lot of determination, dedication, self-discipline, and effort.”


Yesterday was Chest and Back but I couldn’t use the room with the pull-up bar so I did Shoulders and Arms instead. I actually did better than I did last week! My weak wrist (some neurological effects of an antibiotic) made it difficult to push my reps a little harder. At the end of the work-out I felt that my wrists and fingers were really sore!

Today’s work-out challenge was Plyometrics! I can totally say that I did better today than last week. My lunges, squats and jumps were a lot better and I didn’t have to press the Pause button as much!

I haven’t lost an ounce but it’s probably because of the Hershey kisses and pizza and some cocktails I had last week, but I’m pleased at the way my shoulders and arms look. Nothing drastic, the changes I see could just be in my head, but I still like them anyway!

The abs on the other hand might take forever. I still have not mastered the Ab Ripper X routine. I’m not sure if I’ll ever have the washboard abs – not after stretching my belly four times!

Someone asked if I want to be a P90 coach. I don't know yet. I have to complete the 90 day challenge myself...But if you need someone to motivate you, I'm definitely in!

So until next time...