Recollections of the Furer Family vacation of April 8-14, 2012 in as per the memory of the Patriarch, Al Furer. (These recollections will be reissued under the title “ Up From Dementia”.)

Saturday- Roz and I arrived at the Summer Bay Resort in the late morning and were joined around noon by Craig, Jen and the Two Jays. After putting away our stuff  we went to the pool that had the Big Kahuna bar and snack shop.

While the kids swam the adults sat near the bar. Unfortunately, in front of us, a young woman with a loud annoying voice and a microphone was directing a group of over-hormoned adolescents in a series of games accompanied by blaring music from a Hi-Fi system. I found myself fantasizing the various ways that I could mate this female with her stereo. Mercifully Craig suggested something alcoholic and I ordered a concoction from the bar called a “Voodoo Bucket” which is made with five different rums. Craig joined me by sipping his private bourbon supply and in no time the music got lower and the woman less annoying.

Later Roz and I took a ride to check out the route to Gatorland and we then went to Perkins. Roz had a late breakfast and I had a delicious turkey sandwich. We then went to the outlets. While we were gone everyone went to the main pool where the kids played on the inflatables in the lake.

Later that night Mom cooked this pre-seasoned chicken we had brought and it was a great in-house dinner. 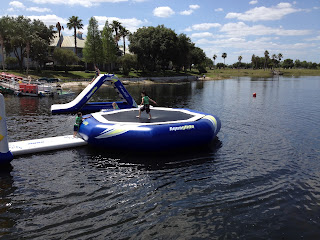 Monday- We went to the main pool where I watched Josh, on the lake, do one flip after another on the trampoline. It was as if there was a key in his butt and someone wound the spring too much. He was surrounded by adoring crumb-catchers and if he was a religious leader they would have been kissing his ring. 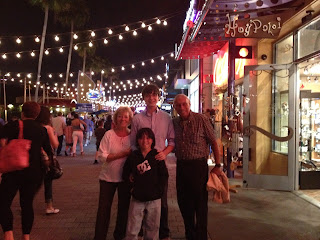 Later we all went to Downtown Disney. As we were walking along we came to an area where a band was performing great rock numbers from the 60’s and 70’s. Jen immediately started moving to the music and I joined the Ultimate Daughter-in Law on the dance floor. We jumped, jiggled, glided, gyrated, bopped and boogied. The crowd around us said to themselves : “How dey do dat?”. It was a perfect blend of Filipino and Jewish jungle fever. 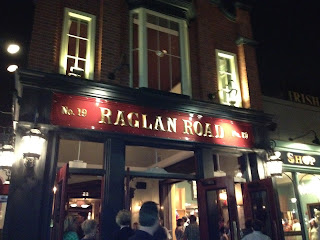 We ate dinner in , an Irish pub, where we dined on shepherd pie, lamb shank and fish and chips. We also drank Guinness and Craig ordered a beer sampler. There was live entertainment in the form of exciting traditional Irish music and clog dancing. 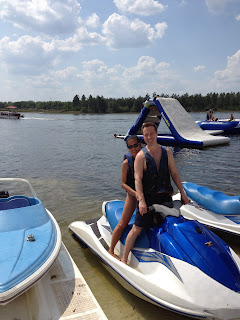 Tuesday- This day Jen, Craig, Jonathon and I rented two wave runners. I and Jonathon were on one and the Enchanted Couple were on the other. We had a blast doing high-speed maneuvers on the lake. However, my son, with complete disrespect for his elders, managed to semi-drown Jonathon and I  by skillfully cutting across our bow and burying us in his wake. Retribution will have to wait for the future.  We had a great time. 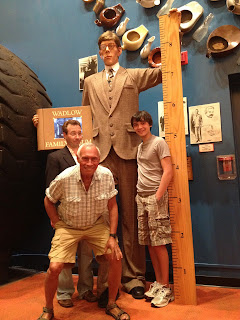 Later we went to Ripley’s Believe It or Not building in . Among the many exhibits were the world’s tallest man (8 feet 11 inches), medieval torture devices, numerous oddities from around the world and movies of Ripley on his travels to collect exhibits.

I noticed an exhibit which was an exceptionally large penis sheath used by a native from the . I showed it to Craig and he stared at it as if he thought that, in comparison, his sheath would consist of three straps and a thimble.

Two of the most impressive exhibits were:
1-     A room constructed on a tilt that induced dizziness. In the room was a pool table where the billiard ball appeared to roll uphill.
2-     A catwalk running through a room with circular revolving walls which induced instant vertigo.

After Ripley we went for a late dinner at Perkins (the same restaurant Roz and I ate in two days before). Since I had previously enjoyed the turkey sandwich so much, I announced that I was going to have a turkey platter. Roz turned to me and said in a loud incredulous voice: “ You’re going to have turkey AGAIN!?!”. Everyone became silent as the word “AGAIN!?!” hung in the air. Nevertheless I decided to exercise my adult privileges and I ordered the turkey.

I enjoyed a little payback the next morning when Roz woke up the boys and the first word out of their mouths was: “AGAIN !?!”.

Wednesday- This was a day for the pool, the gym, some tennis, sunbathing, reading and general relaxation (except for Josh whose internal gyroscope kept spinning).

That night we enjoyed a great meal at Olive Garden and Roz behaved herself. 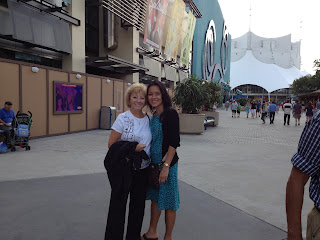 Thursday- Another day at the pool and the lake activities for the kids. That night we went to Downtown Disney and the kids went to Disney Quest (a paradise of interactive games) from 7:00 to 10:00. Roz and I ate and walked around until picking up the kids while Craig and Jen went off for a night on their own. They went to the Boardwalk where they shared a chunk of cow at Shula’s  among other ventures. 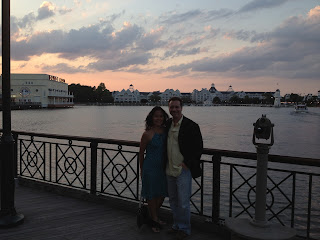 Friday- This day Craig, I and the boys went to Gatorland where we saw an amazing number of alligators and crocodiles plus other animals. You could buy food to throw to the alligators, but the thrown food would often be eaten by long legged birds(herons or storks) that would sometimes perch, unafraid, on the back of an alligator. We also saw an alligator wrestling show and another show which featured snakes.

Josh took two photos, one with a snake around his neck and the other holding a small alligator. In both his smile was wondrous to see.

While we were gone the girls went to the pool and indulged in alcoholic drinks, including the infamous Voodoo Bucket (I hope that they didn’t exhibit loud, slovenly behavior that would sully the Furer name). They said that they napped, gabbed and had a good time.

Saturday- Getaway day! We packed the cars, everyone hugged and agreed that this family vacation was one to remember.

P.S. I’m sure that I neglected to mention incidents or activities that were meaningful to others. In case anyone resents my omissions, think of the Furer Family Motto.