When we least expect it

April 03, 2012
It’s great how technology helps us in so many different ways. I’m sure we all have an idea of what these benefits are so I won’t go through them anymore. Going through the different social media circuit such as people’s blogs and facebook pages however made me realize how wonderful technology really is. The many positive quotes, inspiring words of wisdom and endearing videos people post on the web are just about enough to cheer anyone having a bad day.

For some time now, my day (after breakfast, prayers and some chores) usually begins with checking my mail, surveying facebook, dropping by on my friends’ blog, then going over the latest news. In the beginning, it was just routine. Later, I realized I was doing it to set me in the right mood. The positive quotes and words of wisdom posted on the web by friends and other unknown strangers gave me a boost each day. The short positive quotes became like a new mantra for me. Perhaps unconsciously, I picked up these words and allowed them to steer my day towards a joyful anticipation of what the new day will bring.

And so there I was, feeling good and proud of myself. I finished that magazine article a couple of days before the deadline. I learned to cook a new recipe for the family. I helped my husband with some rush job he needed to submit. I "wasted" a couple of precious hours listening to a friend's dilemma. I found time to clean the house inside out... and a whole lot of other stuff. I must admit, I felt so good I wanted to give myself a pat on the back.

This morning started the same as any other and after the usual routine, I was off to begin another wonderful day. Or so I thought...

It was morning rush hour and the train was late. I was not particularly in a hurry so I allowed people to get in front of me in the line. After some fifteen minutes, I finally got in and squeezed myself in the throng of people inside the train. It was an uneventful ride and finally it was my stop. I got off and headed towards the exit when suddenly, a middle-age lady walked right past me, making me lose my balance and letting go of the books and folders I had in my arms.

Suddenly, my calm and peaceful world was a wreck and though the lady stopped and helped me gather my stuff back, I had already given her the most piercing stare I could manage. There and then, I decided in my mind what a rude woman she was and forced whatever excuse she was giving out of my hearing. But then I heard her say, “I was in a rush... My husband has been missing... and now they’re saying there’s an unidentified man in the hospital who died in an accident... they say it might be him...”

I must have been standing there for a while before I realized she was gone. Who was this woman? Was the dead man in the hospital her husband?

The day had started bright and sunny. I had just accomplished a number of things and felt good about myself. The positive quotes I read on the web helped me face each day with the resolve to smile, to be positive, to be kind. And there I was, when I least expected it, when it was most needed, I failed to smile.  I failed to give someone a positive thought. I failed to be kind. 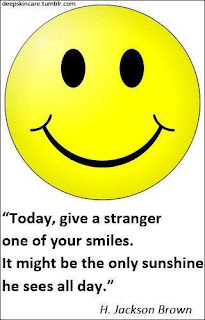 We can write a lot of good stuff on our blogs. We can post endless positive quotes and words of wisdom on facebook and twitter for others to “like” and “share”. We can even manage to practice them on the people we love. But if we fail to live them at the least expected moment on the least expected person, the feeling still sucks.

by resident writer from Writer's Space