Do you believe in magic?

May 01, 2012
A couple of weeks ago, I was at a children’s party of a friend’s son who had just turned 1. Arriving a bit late, I found Ronald McDonald laughing with the kids as they tried to pin the donkey’s tail on his butt. Shortly after, a magician came out and performed some tricks that succeeded to catch everyone’s attention. 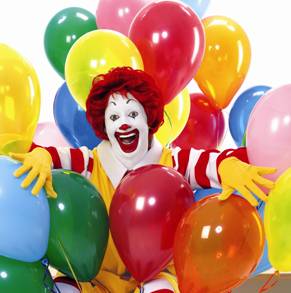 As I watched the kids get mesmerized with his magic tricks, I remembered the first children’s party I attended. It was at my friend’s house and their whole garden had been transformed into a wonderland. There were multicolored lights hanging from the trees and bubbles floated in the air. I felt sure Alice and her friends - the white rabbit, Mad Hatter, Cheshire cat – would all come out and invite us to join them for tea. While the others around me ate and played, I sat in my chair, oblivious to everything but fully captivated by the whole scene in front of me.

Watching the kids completely rapt in attention by the magician’s tricks, I remember myself just as fascinated at that children’s party many years ago. Then, everything seemed possible and willing something to happen was as easy as snatching a rabbit out of the magician’s hat.

As children, we loved such things. But as we grow older, we are told that these things are just make-believe, that there really is no magic, that wonderland does not exist. And so unconsciously, we accept the way things are and believe they are just as they are meant to be. I’ve always felt there is a certain crudeness to this way of thinking but the world can be overpowering that somehow, thinking another way was just not an option.

That day at the party however, as I watched the magician do his tricks and the kids eagerly watching his every move, I wondered if this was just another fork in the road for me. Do I accept things the way they are and consider perhaps that some things happen as a stroke of luck; or do I decide to go back to that wonderland and reclaim my childhood view that indeed, there is magic and that I can make it happen?

That night, long after the party was over, I suddenly became so aware of the magic in my life. There they were, some captured in pictures. Others were confined in my memory. Still many others in the life I lived, choices made and dreams fulfilled.

After so many years of being lost, I am back in wonderland again.

What about you -- do you believe in magic?