"I may not have gone where I intended to go, but I think I've ended up where I needed to be." - Douglas Adams

When I was a child playing with my Barbie dolls, Barbie was always off on some adventure, with Ken along for the ride.  I grew up always thinking that I would someday go to college (which I did), have a career that allowed me to travel the world (I only got to see the really NICE and SAFE parts of industrial New Jersey, New York and Eastern Pennsylvania), and be a carefree, independent woman.


I was somewhat of an entrepreneurial child.  I sold the pumpkins that we grew in our family's garden plot, frequently had a mobile garage sale (from my little wagon) to unload my unwanted/outgrown toys to the neighborhood children, and, as most children, sold lemonade on the corner of our block. This all led to my development as an independent person, ready to tackle the world.
In sixth grade, my teacher knew French and gave us a lesson every Friday on how to speak French.  I believe this was the first time I remember becoming interested in what was beyond the borders of my small hometown, our state, and even our country.  My family had taken many travels in the United States, mainly east of the Mississippi River, but never traveling to locales where we needed a passport.

When it came time to choose a language in high school, I chose French. That first year I was fortunate to go on a trip to London, England, Paris and Annecy, France, and Geneva, Switzerland.  It was at this point that I decided I wanted to study foreign affairs and become a diplomat.  My first year of college was spent at George Washington University in their Public and International Affairs program.  It was not what I was expecting.  The history and political science classes ended up to be my least favorite, and math and statistics, my favorites.

I decided to change my major to Chemical Engineering (talk about a 180 degree shift!) and transfer to a university closer to my hometown.  Four years later, I graduated with a Bachelor of Science degree and headed off to New Jersey to start my life.  I was offered a position in an environmental consulting firm and had family in New Jersey to help get me settled.

Being in New Jersey led me to meeting my husband, buying a home, starting a family, and growing roots in a wonderful community.  But what if I had not taken the path I did?  Would my life be as fulfilling as it is now?  No one will ever know, and I do not dwell on the "What ifs" in life. 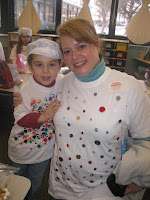 I am certain that the phrase "everything happens for a reason" is true.  I do not usually question why something happens, good or bad, but look for that reason and try to understand it.  At the time, I did not know that I needed to be here, but I made decisions that led me here.  I was honest with myself and listened to my feelings and instincts.  Although I did not start out in life envisioning myself as being married and a stay-at-home mom, I truly believe that this is where I needed to be.

And I am happy.