Twilight Author, Stephenie Meyer at NY Comic-Con: "Life and Death", the demise of the "Midnight Sun" because of "Grey" and "Depressed and Suicidal" Edward Cullen 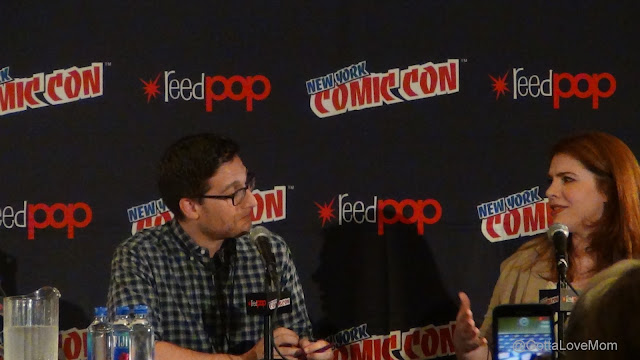 Most of the fans waited in line to see the author talk about the “Midnight Sun”, the unreleased novel that retells the Twilight story in the point of view of Edward Cullen.

She said that there’s always something and that the book seemed to be cursed.

But once she completed "Life and Death" she said she was "in a better place, she was happier in the whole world" which prompted her to "start back at the Midnight Sun" which got the fans excited.

Meyer said "Stop right there" as fans applauded and cheered. "Listen to the story" she continued to say, "I wrote 2 paragraphs, got into the internet and guess what the top story for that day? Grey!"

"I kinda a had a non-literal flip-the-table moment. Whatever!"

You can tell she totally flipped since her idea was stolen (once again) by E.L. James, author of "50 Shade of Grey".

When Meyer showed her mother the draft for "Life and Death", it's interesting that even her mother would have preferred that "Midnight Sun" was the story Meyer completed. Unfortunately, it sounded like "Midnight Sun" is dead!

Stephenie Meyer's "Twilight" books rekindled my love of reading and writing. It was actually after reading her books that I got the motivation to complete and publish my family's immigration memoir, "Out of Status".

When asked about her legacy, Meyer said it's about the lifelong friendships, and people rediscovering their love of reading.

When I heard that I smiled because it's true. I have a friend who didn't enjoy reading, but after I gave her my book, "Out of Status", she went on to read more books after that. In fact, she is now on her 200th book!

In writing "Life and Death", a gender swapping retelling of the Twilight story, finding the right title was not an easy task.

One of her first choices for the title was a quote from the end of the Twilight books, "Twilight, the end of another day" but everyone hated it.

On naming characters Meyer noted that she researched what's available depending on the time of the events. It's interesting to know that "J" names are products of recent events. She also briefly mentioned the importance of "girl-centric" story lines.  After Bella of Twilight, the movie industry seems to be riding the strong female character leads such as Katniss in "Hunger Games" and Tris in "Divergent".

Pattison played a minimal part (Cedric) in Harry Potter but when he walked in the restaurant, people were turning heads - and that's when she knew Pattison is Edward Cullen!

However, Pattison was insisting that the Edward character was "depressed and suicidal".  The fans laughed when Meyer said, "he was really committed!"